Born on March 13, 1912, in Tartu, Estonia.  Studied at Pallas College of Art in Tartu.  Continued his studies in Finland and Sweden in drawing, painting and applied leather craft.  From 1945-50 primarily active as a graphic artist and painter.  Exhibited in Finland, where he gained recognition for his illustration of A. Kivi’s work, in Sweden until 1950.  Immigrated to Canada and developed a unique technique of painted lino carvings.  Works consisted of Estonian, religious and modernistic themes.

Continued to illustrate books and periodicals as well as for Estonian newspapers.  Exhibited in many successful one-man shows in oil, water colour painting and his unprecedented lino medium.  Articles and favourable reviews of his work have appeared in many newspapers and catalogues in the United States and Canada.  Exhibited with the EKKT in 1956 and 1965.  Works are in many public and private collections in Europe and North America.  Died in Toronto on November 5, 1975. 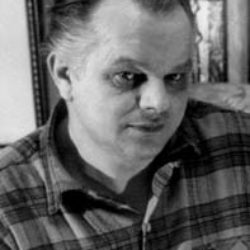