August Vomm was born on July 4th 1906 in the Penuja township of the Abja region of Estonia close to the Latvian border. August studied portraiture under Ado Vabbe at the Tartu “Pallas” Art Academy from 1924-1927. From 1928-1931 he studied sculpture under Anton Starkopf and Voldemar Mellik. August was the 17th graduate from the Pallas Art Academy. After graduation August Vomm worked as a freelance artist/sculptor first in Rakvere and then Tallinn. August became a member of the teaching staff at the Estonian National Art Institute in Tallinn in 1946 and became a professor of sculpture in 1971. August Vomm died on May 1st, 1976. 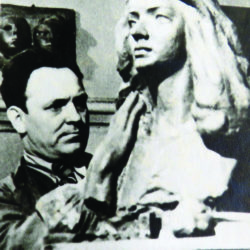