Born January 24, 1924 in Estonia.  Fled to Sweden during the war in 1944.  Has had a great interest in painting since elementary school.  Began painting in Boras, Sweden, taking lessons from Swedish artist Johanson.  Immigrated with her family to Canada in 1950.

After a long hiatus, raising her family, she began painting again, taking workshops in the Varga “Wet on Wet” technique at The Painters’ Paradise in Toronto. Began seriously painting in 1985 and became a member of the EKKT in 1989.  Has taken part in the annual EKKT art shows and also at an EKKT group show at Kastellaani House Gallery in Estonia in 1996.  In 1997 was presented at Toronto City Hall with the Canada Day Volunteer Service award for her volunteer work.

Paints mainly with oils and acrylics.  Her work hangs in independent collections in Sweden, Estonia and Canada.  Resides in Toronto. 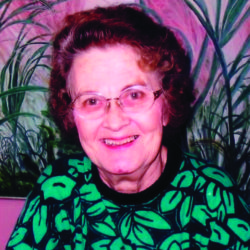