Born on May 21, 1917, in Someru, County of Viru, Estonia. Studied under Prof. Fileen at Art Academy of Helsinki in Finland. Discovered frozen watercolor technique. Developed three dimensional painting with leather. Exhibited in over 40 individual shows in Canada, the United States and the Nordic countries in Europe.

Recipient of the British American Oil Award juried by Thor Hansen, the Queen Elizabeth II medal for contributions to culture (1976), and the Estonian Cultural Award in Canada (1972). Recognized by the MacKay Centre in Montreal for his contribution to teaching the disabled and visually impaired. Won over 50 awards for this leatherwork and taught leathercraft to youngsters for many years at scout camps and summer camps. Was awarded the best watercolour prize at Esto’76. Appeared in a documentary produced by Alar Kivilo at the CBC entitled “Ruberg”.

Works have been on display at the Montreal Museum of Fine Arts and at the Avio Gallery in Washington, D.C. Exhibited also at Esto’72, ’76, ’80, ’84 and ’88. Liked to experiment to find new ways and methods in colour, form and material. In articles in periodicals and magazines in Finland, Canada and Estonian newspapers. Last exhibit “Traces from the Arctic” revealed a boldness and starkness found in the winter quiet of Lapland. 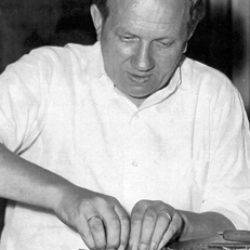