Born on March 27, 1902 in St. Petersburg, Russia.  Arrived in Estonia in 1910.  Graduated from the Art Academy Pallas in Tartu, Estonia, furthering his studies in painting and industrial art at Conservatoire National des Arts et Metiers in Paris, France.   Member of EKKT since 1961.

Exhibited in 1961, 1965, 1968-70, 1980-81 and 1985.  Exhibited at art exhibitions since 1927 in Tallinn, Tartu, Hincley (England), and in Toronto, Canada since 1954.  Won awards for his sculptures and advertisement designs in competitions in Estonia.  Works are in many permanent displays such as Petseri cloister caves (his relief) St. Mary de Castro Church in Leicester, England, St. Andrews Church in Toronto, and the Estonian House in Toronto.  Set designer for the Estonian National Theatre in Toronto for several years. 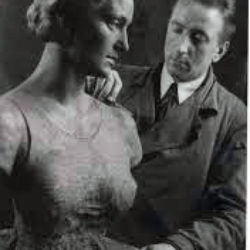