Velta Paparde was a worldly woman of many talents, born in Liepāja, Latvia 1909. She studied art with fellow Baltic women at the Art Academy of Latvia in Riga and developed her technique over decades of travel. She lost her first husband during the Soviet occupation of Latvia, then remarried later in life and settled her family in Toronto, Canada. Known by friends and family as the artistic soul who’d spend entire afternoons sitting before a canvas and easel capturing scenes wherever inspiration struck. She was also an accomplished horsewoman who had the honor of riding the majestic, elegant Lipizzaner horses throughout Eastern Europe. Her penchant for creativity and expression are beautifully captured in the many artworks she completed over the years, including several hand-sculpted ceramic pieces. 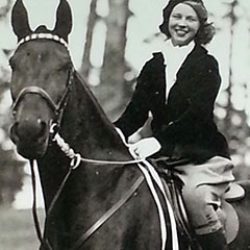